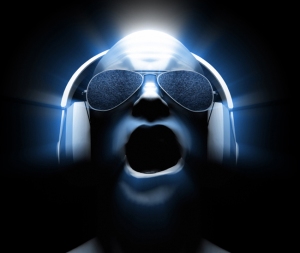 I was recently asked what I thought about binaural beats and more specifically i-dosing. Now, I know there is a trend of interweb goers to be a bit on the ADD side, so I will try to keep my thoughts on this matter simple and brief.

Can music get you high?
Simple answer no, complex answer yes, sort of. Drugs physically and directly alter your brain chemistry in various ways and with varying levels of intensity as to produce the effects that are associated with each of them, their respective “highs”. As a result of the alterations and intensity thereof, people often have very intense and traumatic experiences (both positive and negative). Under these circumstances, people have been known to develop post-traumatic stress disorder. PTSD can lead to what both hippies and war vets (and some divorcees) call “flashbacks”. A flashback usually occurs when something triggers a memory related to a traumatic experience, this could be physical stimuli or even a thought or emotion. Flashbacks can be so intense, that people can relive the event to a very powerful degree, experiencing anything from “tracers”, fear, euphoria, or intense war related events, which are commonly associated with Vietnam vets.  Like-wise, people can become so addicted to the physiological effects of the drugs that they can develop behavior altering addictions. We tend not to see the same results (at least in any similar intensity) from music.

So are the binaural beats altering brain chemistry like a drug or inducing some sort of flashback? My guess is the latter. Though music can alter the brain chemistry temporarily, I don’t think that is what the key element in what is happening here, at least not with any intensity to be akin to the “high” received from drugs. I acknowledge that there have been studies suggesting that music can cause the release of endorphins and even create a kind of addiction, but so does chocolate and we can hardly call eating a snickers bar getting high. Music on its own just doesn’t seem to have the level of intensity that drugs have. There doesn’t seem to be any evidence of long term effects or physiological side-effects generally associated with brain altering drugs. In reality, binaural beats themselves are more like an auditory illusion than some sort of mythical mental “brown note“. What I think is more likely happening is that, in some cases, these frequencies are triggering some kind of flashback or are triggering some kind of pre-existing chemical imbalance.

Don’t get me wrong, I very much believe, have witnessed, and have experienced first hand the powerful effects music can have. For example, in my late teens the song “No Quarter” by Led Zeppelin triggered some genuine fear in me the first few times I heard it. It was quite some time before I could bring myself to listen to it all the way through. Now it is one of my favorite songs. The question is do I think the song itself was altering my brain chemistry like a drug to produce the fear or triggering something like a repressed memory or some kind of teenage hormonal issue that was pre-existing? The simplest and most likely answer is that it was triggering something already there and not altering my brain directly to produce the effect of fear.  This is one of the important distinctions, indirect effect vs. direct effect. Some of you will naturally want to argue that “well, if the effect is the same then it is the same blah blah blah…”, no. Experiencing the traumatic event itself and having a triggered flashback or memory related to that event are not the same.  The sources of stimuli are very different, not unlike seeing an actual body of water and seeing a mirage of one.

One last quick point on the matter, people (especially youths) can be very suggestible. If you tell them they will experience something a certain way, there is a real chance they will. The brain can play some messed up tricks on us, isn’t it likely that several of these cases are the result of suggestion? Look at it this way, if you really could consistently and directly make people react this way by sound alone, don’t you think the government and ad agencies would already be using it to control us? (That’s a free one for all you conspiracy theorists, but I better not read anything about how the government used binaural beats to make us believe 9-11 happened when it really didn’t or binaural beats were what killed JFK or anything like that.)

Conclusion
Are people really getting high (in the sense of a drug high) from binaural beats? Not likely. Some of you may not care because if it seems like you are on drugs then that is good enough for you. Like that one girl at every party that is sooo drunk even though she has, unbeknownst to her, been drinking O’douls all night.  If you are brave enough to try it, go for it. Let me know how it worked out for you, let me know if you get flashbacks in the long term.  But ultimately, philosophically speaking and physiologically speaking for that matter, there is an important distinction to be made.  Music can effect you, trigger moods, be addictive, trigger the release of endorphins, etc., but it doesn’t seem to be doing it in the same direct manner or on the same level that drugs do.  At best it is an indirect catalyst, not a direct cause.